When Chinese Chauvinist DAP gets power 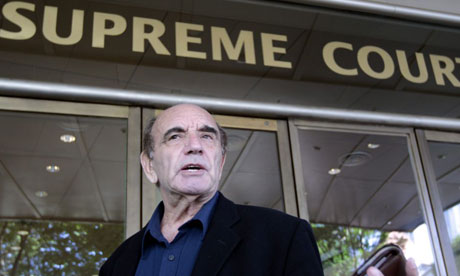 What happened at the Singapore Courts yesterday would be a good reflection on what will happen when Chinese Chauvinist DAP gets power controlling the nation. Despite their ‘democratic action’ name, they would act as a draconian iron fist ruling party and incarcerate any quarters which go against them, even merely criticism.
The Guardian from UK reported Shadrake’s sentencing:

Alan Shadrake, 76, was found guilty of contempt of court in the case based on his book, Once a Jolly Hangman: Singapore Justice in the Dock. Photograph: Stephen Morrison/EPAThe British author Alan Shadrake is today facing a possible prison sentence after a court in Singapore convicted him of challenging the integrity of the city state’s judiciary in a book criticising its use of the death penalty.Shadrake faces a custodial sentence or a fine – or both – for contempt of court when Singapore’s high court sentences him next week.  The Singapore constitution does not specify a maximum penalty for the crime, according to reports, although prosecutors are reported to have demanded a prison sentence of between three and six months and an unspecified fine.
The judge, Quentin Loh, said he was giving 75-year-old Shadrake “a final opportunity to make amends”.
The author, who has refused to apologise, said after the ruling that he would “work out how to do this and satisfy the court”.
The case has cast further doubt on Singapore’s commitment to freedom of expression. Shadrake’s lawyer, M Ravi, insisted his client had not intended to scandalise the conservative state’s “hypersensitive” judiciary, adding that comments critical of the criminal justice system were “fair criticism”.
The case was brought in response to Shadrake’s book, Once a Jolly Hangman: Singapore’s Justice in the Dock, which accuses courts of bowing to diplomatic and economic pressure in deciding how to dispense justice.
It also accuses them of favouring the wealthy and abusing the law to suppress political opponents.
The book includes a profile of a former chief executioner and interviews with human rights activists, lawyers and former police officers.
According to Amnesty International, Singapore, with a population of five million, has one of the world’s highest per capita execution rates, having put more than 400 people to death over the past two decades.
Loh said: “This is a case about someone who says, among other things, the judges in Singapore are not impartial … and are influenced by political and economic situations and biased against the weak and the poor.”
Last month, Singapore’s attorney general’s office described comments in Shadrake’s book as “especially pernicious”, adding that they “cannot possibly come within any reasonable notion of fair criticism”.
The book, which was published in Malaysia, where Shadrake is based, is reportedly not banned in Singapore, but sellers and distributors will have to seek legal advice before releasing it.
Shadrake, whose passport has been confiscated by the authorities, was released on bail. He was arrested in July while promoting the book in Singapore, and is also being investigated for possible criminal defamation – a crime carrying a prison sentence of up to two years.
************

Chinese Chauvinist DAP would probably invoke the same draconian and iron fist ‘bully tactics’ to remain in power, when they have power. They would quash any opposition that comes by their path in realising their control-freak demonstration of power. Of course, they would use all what is available within the limits of the law.
They learnt what PAP did in Singapore. When Lee Kuan Yew and later Goh Chock Tong faced opposition from a thorny single labour leader Joshua Benjamin “JB” Jeyaretnam, the unlucky maverick politician was made bankrupt to legally disqualify him from becoming an MP and hold party position. Naturally, being a bankrupt also means that Jeyaratnam is impaired to work on his politics.
Chinese Chauvinist DAP Penang already shown their true colours, much like their PAP one-time master. Emperorismo Lim Kit Siang & co., which include son Lim Guan Eng for the longest time fought the Official Secrets Act (OSA) for the longest time. Deemed a law which inhibits transparency, DAP Viceroy of Goergetown is now the Chief Minister of Penang and invoked the OSA for the state government’s administration, which defied his own call for ‘transparency’.
Issues like stall allocation in Komtar, Kampung Buah Pala, Kampung Tanjung Tokong and the most recent, the building of private college in Kampung Genting, Balik Pulau.
The Star report:

GEORGE TOWN: Police detained a protestor following a noisy demonstration by more than 100 people outside the Penang State Assembly building on Tuesday where the assembly sitting was in progress.
The man was seen taken away at 11.37am for shouting and disorderly behaviour even after police had ordered the crowd to disperse.
Earlier, the crowd – including some 30 landowners from Kampung Genting in Balik Pulau and Komtar kiosk traders – staged a noisy protest over land acquisition and relocation issues.
Several policemen kept watch from the assembly building compound as the group, which started arriving about 10.30am, demanded that Penang Chief Minister Lim Guan Eng and his exco members come out and meet them.
Waving banners with the words ‘Kami Tak Rela Tanah Nenek Moyang DiRampas’ (We Do Not Want Our Ancestors’ Land To Be Seized) and ‘Langkah Mayat Kami Dulu’ (Over Our Dead Bodies), the protestors accused the DAP-led state government of cheating the people.
At 11.20am, Balik Pulau Umno Youth chief Aziaan Ariffin and four representatives of the residents were seen entering the assembly building compound to hand over a memorandum to Lim.
In an earlier report, Aziaan had claimed the state was acquiring the plots in Pondok Upeh and Kampung Genting for RM8 per sq ft when the market price was RM18 per sq ft.
Lim, however, had said the price was in accordance with the amount proposed by the Valuation Department and that the and acquisition was carried out by the Federal Government under Section 8 of the Land Acquisition Act 1960.
Komtar Merchants Association deputy president Mohamed Ghani Abd Jiman, who was also present at the protest, had said all 18 kiosk traders at Komtar Level 3 concourse area would not budge despite being told by the Penang Development Corporation to move out by Oct 31.
The directive by PDC (the management body that manages Komtar) was issued in April this year to make way for renovation works which will take place in mid November.
The protest caused a traffic jam along Light Street, as hundreds of curious onlookers gathered to watch the commotion.
************

The fact is that all of these cases are about the Malays and despite the Malays are the majority (with the exception in Penang where they are the minority), it clearly shows the attitude of the Chinese Chauvinist DAP and their iron-fist ability to oppress others, just like what the PAP did in Singapore. The Malays as the majority on the Penang island is deemed to be oppressed by the Chinese Chauvinist DAP.
Chinese Chauvinist DAP does not allow dissent. They rule in autocracy and practice dynasty building, for the Lims and Singhs just like the Lees across the Johor strait. Potential good leaders such as Wee Choo Keong, Lee Lam Thye, Hu Sepang, Kua Kia Soong, Kerk Kim Hock and others fizzle into oblivion as Emperorsimo Lim Kit Siang and heir apparent Lim Guan Eng tighten their grip on the Chinese Chauvinist party. Now that they have mastered the art of manipulating PAS and PKR for them to remain in power and get their ‘marriage-of-(in)covenience-in-an-unholy-union-0f-strange-bedfellows’ partners to garner Malay majority support swung for their benefit, they are entrenching their position further.
on November 4, 2010 bigdogdotcom.wordpress.com
Posted by Phd in Economics at 5:01 PM