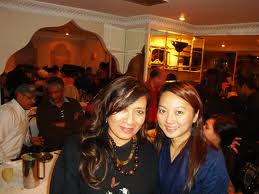 Taking the plunge: The difference between Rais and Taib Mahmud

Sarawak Chief Minister, Taib Mahmud has no time for Information, Communication and Culture Minister Rais Yatim, who advised Malaysians planning on marrying a foreign spouse, ‘to think a thousand times before taking the plunge’.
And take the plunge he did, for Taib did not just marry a foreigner from Syria, Ragad Waleed Alkurdi, he married someone who was 45 years his junior. Taib is 74 years-old while his bride turned 29 on the day they held a wedding reception for the elite of Malaysian society.
Last March, Rais said that studies conducted between 1995 and 1998 by “several sociologists in the country” had shown that seven out of ten mixed marriages ended in divorce.

He said, “The failure of marriage is caused by cultural differences, religion and how a person is raised. Most marriages are based more on ‘short-term love,’ and after a brief period, people will return to the culture and religion that they were born into.”
His daft comments started an internet firestorm on Facebook, Twitter, on blogs and various websites, as people condemned him.
Most were from those who were currently in a mixed marriage, or were the children of mixed-marriages. They had personal experience of such matters and were not part of the Culture minister’s dubious study.
Malaysia has a firm foundation of mixed marriages. A good percentage of our royal families have intermarried. Our Baba-Nyonya and Portuguese communities are the product of mixed marriages.
So why do ministers like Rais feel that the rakyat should be dissuaded from marrying foreigners, but it is quite acceptable for politicians and royalty to intermarry?
Rais seems determined to prove what we have known for a long time - that one rule exists for the common rakyat and another for royalty and the elite.
Most same race/religion marriages break down because couples drift apart, neglect each other, have a lack of empathy and understanding, experience infidelity and dishonesty, and suffer from a lack of commitment or understanding of what a marriage actually entails.
Mixed marriages go through the same trials and tribulations but face extra challenges which stem from a lack of community or family support. There is also the added complication from the failure of governments to acknowledge the foreign spouse.

Taib and Ragad’s goldfish bowl is of their own doing principally for the wrong reasons.
He is eager to promote the halal business empire of his family and also the SCORE corridor of Sarawak, to wealthy mid-east investors.
Posted by Phd in Economics at 7:59 PM