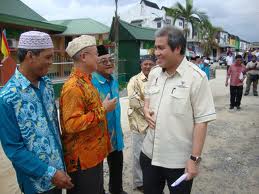 LAWAS: The government had approved RM500,000 for the upgrading of the mosque at Kampung Awat-Awat so that it can accommodate more people and worshippers.

Second Minister of Planning and Resource Management Datuk Amar Haji Awang Tengah Ali Hasan revealed this to the media during his inspection visit of Lawas Mosque where he performed the Asar prayer.

The new mosque of Kampung Awat-Awat is not ready for use as works on the basic amenities and other facilities, including enlarging the prayer hall, are still in progress. As such, the villagers are still using the old mosque situated at the mainland Awat-Awat.

Meanwhile, Tengah called for all the necessary works to upgrade the Lawas Mosque to be done appropriately and according to the schedule set.

The upgrading work involves the conference room and various facilities for the worshippers and officials of the mosque, including its ICT centre.

Teng ah l a t e r cont inue d his inspection visit to var i - ous development projects in the district before he departed for Kota Kinabalu to return To Kuching.