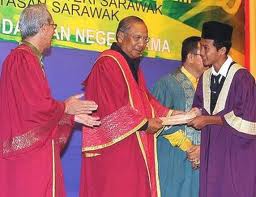 Posted on May 23, 2011, Monday
Tan Sri Datuk Amar Adenan Satem
KUCHING: Yayasan Sarawak would be entering an agreement to develop a new property to be known as Wisma Sarawak in Kuala Lumpur.
The seven-storey building, which would have ethnic designs and features depicting the state, was described as a piece of landmark owned by Sarawak in the nation’s capital.

This was mentioned in a special feature on Yayasan Sarawak in the latest publication of local magazine ‘Happenings in Sarawak’.
Yayasan Sarawak chairman Tan Sri Datuk Amar Adenan Satem was quoted as saying Wisma Sarawak is expected to be completed within the next two to three years.
To be located at the township of Sungai Besi, the building would house Yayasan Sarawak’s office and Rumah Sarawak, as well as offices of state agencies intending to spread their operations to Kuala Lumpur.
The signing of agreement with the developer is expected to be held this Friday (May 27) in conjunction with the foundation’s 40th anniversary celebrations.
Readers can also get a glimpse of how the landmark would look like as an artist’s impression of the building is featured in the ‘Happenings’.
The magazine also ran an interview with Adenan who shared his views on the history, achievements and future plans of Yayasan Sarawak.
‘Happenings’ can be downloaded for free at www.happeningsarawak.com or call 082-242439 for hard copies.
Posted by Phd in Economics at 11:59 AM