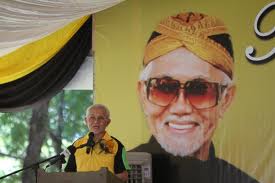 MUKAH: Working together for the good of state and its people will continue to be agenda of the state government, says Chief Minister Pehin Sri Haji Abdul Taib Mahmud.

And development based on the multi-racial approach would be able to bring Sarawak to a greater height.

“This state Barisan Nasional (BN) government which represents each and every ethnic group is to stay.

“It is the only team capable of developing the state and bring peace and prosperity to its people.

Indeed, this legacy of multi-racial and harmony is responsible for bringing progress to the state since independence nearly 50 years ago,” said Taib.

Taib, who is also the state BN Chairman and President of Parti Pesaka Bumiputera Bersatu (PBB) reasoned that the state was not so easy to develop due to its vast size, difficult terrains and very scattered population.

“However, with the spirit of togetherness and peace prevailing among the loving multi-racial Sarawakians, we have been able to achieve what we have set out to do which we are enjoying today.

“The task of developing a state as huge as Sarawak has been achieved though much still needs to be done.Not a single race is sidelined in our development agenda.

“The state per capita income has increased 7-fold since 1971 and only 5.3 percent of Sarawakians are considered living in poverty,” he said.

He added that Sarawakians would see even better days when projects under Sarawak Corridor of Renewable Energy (SCORE) come on-stream at its height in 2030.

“It is projected that SCORE would create some 1.6 million jobs during full implementation at which time Sarawak would have achieved a high-income economy.I have confident that we can achieve this because of the very high commitment the people have since the last 30 years.” Touching on the thumping victory of state BN in the just concluded election, he said it was proof that the people still had faith in the government of the day which could bring about progress and development to the state.

“For that, I would like to thank all the voters for their support and in particular the voters in Balingian for giving me a very handsome victory,” he said.

He said he was also happy to note that all the 10 PBB new faces had won with a big majority.

The Chief Minister also repeated his stand that this would be his last term and that he would step down mid way into his tenure.

“I hope that whoever takes over will continue with the legacy to develop this state for the good of the people.

“Just remember to govern with the spirit of togetherness and fairness so that no one is left behind in the mainstream of development,” he said.

Deputy Chief Minister Datuk Patinggi Tan Sri Alfred Jabu and the organising chairman who is Mukah Member of Parliament Dato Sr i Dr Muhammad Leo Toyad also spoke at the function which was attended by more than 7,000 people.

Apart from the dinner, the auspicious occasion was made merrier with the cultural show presentations and fire works.
Posted by Phd in Economics at 11:59 AM