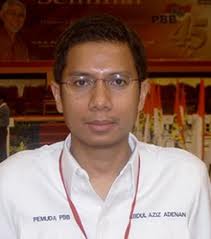 Posted on May 16, 2011, Monday
KUCHING: Movement of Change, Sarawak (MoCS) is a public threat because it undermines the legitimate process of election by demanding that Chief Minister Pehin Sri Abdul Taib Mahmud step down in three months.
No one has the right to make such demand, said PBB Youth information chief Abdul Aziz Adenan, as Taib, including leaders of component parties of the state BN, has been given a fresh mandate by the rakyat to continue leading the state.
By giving Taib an ultimatum to step down by Aug 13 last Friday, he said MoCS was actually making a mockery of the democracy in the state.
“MoCS has no right to ask the chief minister to vacate his post when the rakyat have decided otherwise.
“This shows that MoCS has no respect at all for the rule of law in the country,” he said when contacted yesterday.
He said while MoCS, a non-governmental organisation (NGO), has a democratic right to express its opinion on any subject, it should know that questioning the mandate of the rakyat was not a wise move.
Touching on the purported ‘recruitment’ drive by Umno members in Sarawak, Abdul Aziz stressed that maintaining the political stability in the state was the duty of all members of Barisan Nasional (BN).
He said he concurred with party vice-president Datuk Daud Abdul Rahman’s statement last Thursday that division among the people was inevitable if Umno were to spread its wings to Sarawak without approval from the state BN.
Aziz said the state would only able to bring development to the rakyat if all members of the coalition respected each other.
“Our aim is to serve the rakyat using the Sarawak BN platform… and since the state BN is able to perform its duty in serving the rakyat, there is no basis for anybody to make any effort to increase PPP membership, or any Semenanjung-based BN parties in Sarawak,” he added.
He also agreed with Daud that PBB was still the backbone party of the state BN by virtue of the strong mandate given by the rakyat in the last election.
The Youth information chief also said he agreed with PBB supreme council member Datuk Dr James Dawos for stressing last Thursday that PBB was a more suitable party for Bumiputeras in Sarawak regardless of their races or religions.
“Datuk Dr James Dawos is bring frank when he said the presence of Umno in Sarawak would not help BN but would only cause problems,” he said, adding “Datuk Dr James Dawos wants to preserve the strength of Sarawak BN with his statement”.
Aziz advised all youths to acknowledge the unwritten understanding between the state BN and Umno as mentioned by PRS president Dato Sri Dr James Jemut Masing, who pointed out that Umno had on many occasions assured
Sarawak BN that it would not spread its wings to the state as long as the people’s welfare, especially that of the Bumiputeras, was well taken care of.
Posted by Phd in Economics at 7:39 AM