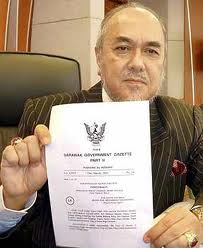 KUCHING: Sarawak Pakatan Rakyat (PR)’s shadow cabinet is not recognised by the state’s constitution, Speaker Datuk Seri Mohamad Asfia Awang Nassar said today.
In Sarawak, he said, the state constitution, standing orders of the State Legislative assembly and State Legislative Assembly (Privileges and Powers) Ordinance 2007 did not give any recognition to the opposition coalitions to be a constitutional alternative government.
“However, they are at liberty to make their own arrangements but cannot expect any constitutional backing,” he told reporters here today.
Asfia was asked to comment on PR’s shadow cabinet, which was unveiled on Sunday. The PR is made of PKR, PAS and DAP.
He added that under the Sarawak constitution, due recognition was only given to the state government which comprised of ministers and assistant ministers.
Meanwhile, Sarawak Progressive Democratic Party (SPDP) president Datuk Seri William Mawan said the PR’s shadow cabinet would provide a better channel for the opposition members to voice their views or feedback to the government.
“I think it is OK (shadow cabinet) but they have to manage properly, reasonably and in good manner.
“I hope the shadow cabinet will enable the representatives (in the line-up) to exchange or present alternative views to the government in a better way rather than shouting individually here and there as now, they have their own areas and responsibility to take care,” he said.
Parti Rakyat Sarawak (PRS) president, Datuk Seri Dr James Masing said the shadow cabinet unveiled by Sarawak PR would enable the people to judge them accordingly.
“It is time for them to prove and behave like ministers. I hope they could be a responsible opposition and exchange views in the (state assembly) sittings,” he said. – Bernama
Posted by Phd in Economics at 11:59 AM