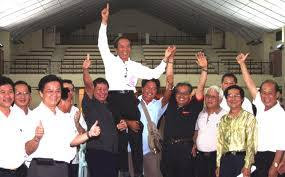 Sibu, that remarkable town on the mighty Rejang that the Foochows built all those long years ago with sweat, blood and tears, notched another milestone: the Chinese community decided that May 16 was to be the day when they would show the rest of Malaysia, and indeed the world, that Najib’s largesse however packaged had all the smell of moral decay, or not to put too fine a point on it, undisguised vote buying.
This illegal and immoral practice is apparently endorsed and encouraged by both the Election Commission and the Malaysian Anti-Corruption Commission. Sibuans on the other hand would have none of it.
What was so distressing was that the EC and MACC were ever so quick to affix their "No Action" tab on what clearly was corruption committed by Najib who offered financial inducements to the voters of Sibu to return the Barisan Nasional candidate. Similarly they took no action against Najib for his shenanigans in the Hulu Selangor by-election. Most surprising of all, there was not even a whimper from the self-proclaimed anti-corruption fighter, Transparency International Malaysia. Have they decided to flow with the tide of political corruption as well? Najib’s practice of bribing voters into supporting his election agenda shows a complete and utter disdain for public opinion and the law.
What is the point of spending hundreds of millions on beefing the MACC up, already bloating and bursting at the seams with gross inefficiency, when the prime minister bribes the voters of Sibu, with complete arrogance and impunity? To our complete surprise, the good citizens of Sibu, unlike some of their fellow citizens elsewhere, turned up their collective nose and gave Najib the elbow, more or less telling him to "take a running jump into the Rejang."
I had misjudged the mood and the strength of character of the people of Sibu, thinking that the dangling by Najib of the millions of ringgit from his slush funds would be enough to overcome any moral scruples they might have had. I spent six days in Sibu shaking hundreds of Chinese, Malay and Iban hands. And never for a moment did it dawn on me that the Foochows of Sibu would stand up to Najib, who in the end was reduced to a figure of fun and ridicule, being described as Santa Claus dispensing ill-will instead of good cheer. Money may buy some of the people some of the time, but in Sibu principles won the day. They had had a surfeit of corruption, in all its manifestations, in their dealings with the Taib administration, and they did not need anymore of it.
It took a lot of courage and determination to withstand the onslaught of raw power of a prime minister, particularly one of indeterminate ethical provenance. As if that was not intimidating enough, they had a chief minister, so I was told who rules with an iron fist in a silken glove to contend with and whose voracious appetite for self-enrichment has long been whispered about by people too frightened to speak up against grand corruption at the top. His unbridled excesses would make Robert Mugabe look like Mother Teresa. And where is the much touted independent corruption commission?
To all those who voted for change for a better Sibu, a Sarawak free from the shackles of wonton, unremitting greed of one man and his family, and a Malaysia fit for all, regardless of who we are, I have this to say. You have, by your robust, ethical response to Najib’s unprincipled behaviour, earned for yourselves an honourable place in the pages our country’s history. Sibu has restored my faith in my fellow citizens who possess in large measure attributes that once inspired my old English headmaster at the Sultan Abdul Hamid College in Alor Setar to coin the phrase "the excellency of man."
What Sibu has done will resonate in the weeks, months and years to come in the rest of this country. Najib’s approach to the Sibu campaign was unbelievably crude as well as insulting to the dignity of the Sibuans, particularly the proud Foochows. For him to apply the principle of one size fits all when he merrily parachuted into Sibu on what he thought was a his fail-safe "vote for money’ mission was totally ill-advised and insensitive. Najib is a believer in the exercise of power through the money bag.
The voters of Sibu knew Najib’s weaknesses more than he was prepared to concede, and while they were happy enough with the goodies he threw at them, they were suspicious of the proverbial "Greek bearing gifts." In the event, the citizens of Sibu shut the city gate in his face, having taken the money and voting for the opposition. Good try, Najib. Winning the hearts and minds with your heart and not your pocket is a better option; it is more honourable and less likely to get you into trouble with the MACC, if and when it finally decides to open its eyes.
MySinchew 2010.05.22